Clean CARFAX. 2017 Dodge Grand Caravan White Knuckle Clearcoat 4D Passenger Van 3.6L V6 24V VVT 6-Speed Automatic SXT (Options). (Vehicle make) has done it again! They have built some fantastic vehicles and this great-looking (vehicle type) is no exception! No trip is too far, nor will it be too boring! Thank you for visiting Peach Chevrolet! We're located near Walmart at 2227 Douglas Avenue. Our dealership features a full inventory of competitively priced and high quality new and used cars, trucks, and SUV's. E-mail or call us with any inquires regarding a new or used Chevrolet, Buick, GMC, or Cadillac. Come see the difference with a hometown dealer! Drivers across Southern Alabama Come to Peach Chevrolet Buick GMC for a Fun Car-Shopping Experience.

Model Overview
There are four Grand Caravan models for 2017: SE, SE Plus, SXT and GT. All Grand Caravans come with a 3.6L V6 engine that makes 283 horsepower and a 6-speed automatic with "Autostick" manual control.
Anti-lock brakes, tire-pressure monitoring, multi-stage front air bags and supplemental side curtain air bags for all three rows of seats are standard equipment, which contribute to its across-the-board 5-star safety ratings from the NHTSA. All Grand Caravans also get an electronic stability program and a ParkView back-up camera.

Convenience is a must in any minivan. All Grand Caravans get the 3rd-row Stow-and-Go seats that fold completely into the floor to maximize cargo space.

The Grand Caravan can be outfitted to tow up to 3,600 lbs. with the Trailer Tow Group, which includes a heavy-duty radiator, transmission oil cooler, load-leveling and wiring harness. 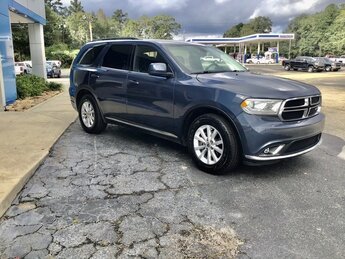 * Pricing -  All vehicle pricing shown is assumed to be correct and accurate. Incentives, credit restrictions, qualifying programs, residency, and fees may raise, lower, or otherwise augment monthly payments. Additionally, incentives offered by the manufacturer are subject to change and may fluctuate or differ based on region and other considerations. Unless otherwise noted or specified, pricing shown does not include title, registration, or tax fees and costs. *All sales pricing, savings, and discounts include ANY and ALL applicable and non-applicable rebates, dealer incentives, manufacturer incentives and any other available discount stated or non-stated in the sales price.
** Dealer reserves the right to change sales price due to ANY error or omission made by dealer at ANY time.

* MPG - Vehicle information, as well as features and other inclusions, may vary by model and are based exclusively on standard equipment. No claims, warranties, or guarantees have been made related to the accuracy of customer payments, model equipment, or vehicle pricing. Please call with any questions you might have and to reassert the accuracy of any information presented here.

Use this shortened URL to share your current search results.

The health of our guests and coworkers at Peach Chevrolet in Brewton, Alabama is our utmost concern. Here at Peach Chevrolet we have focused all of our efforts on maintaining this standard. Greetings with handshakes will be avoided. We are sanitizing our facilities throughout the day. Social distancing as well as avoiding physical contact with our staff and guests is our mandate at this time.

As we continue with these policies in place, if you’re not comfortable with physically coming into any of our facilities we will be offering free pickup and delivery service. These policies are effective immediately to assist you with any service, body shop or maintenance that you may require.

Also available is our door to door (d2d) sales process. From our front door to your front door we will bring any vehicle to your home for a test drive, trade in appraisal(s), application process and all paperwork needed to complete the purchase of your vehicle of choice.

Peach Chevrolet appreciates the opportunity to help you, the great people of Escambia County Alabama and beyond. We understand these are uncertain times and look forward to helping you in any way we can to make things as close to normal as can be.

We have not changed our normal business hours and have no plans to at this time. We are open and available for any and all of your automotive needs. If you would like to schedule a d2d visit with a sales professional please call 251-241-9838. To schedule free pickup/ delivery for service or body shop repair please call 251-241-4079.

If you have a need that hasn’t been addressed above don’t hesitate to call us at 251-241-9838 and we will do our best to accommodate you. We will all get through these challenging times. We  will keep all of our first responders, health care workers and government leaders in our thoughts and prayers.